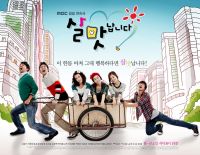 120 episodes - Mon~Fri 20:15
Synopsis
Is life treating you well?
A message of hope to married couples who find life dreary and boring!
A story about the love and married life of six married couples who are pigeonholed into six types of marital relationships!

Model marriage: Hong Man-bok and Kang Poong-ja
A couple thats been married for 35 years and counting.
An emotional, hot-tempered wife and a laconic husband who has a heart of gold.
They finish each other sentences and have a loving relationship.
They show what the essence of love is through their lives.

Shotgun marriage: Jang Yoo-jin and Hong Min-soo
An immature husband married to a hot-tempered older woman.
Accidentally impregnating a woman six years older than him for a night of sex, Jang Yoo-jin finds himself forced to do the decent thing and marry Hong Min-soo.
While he faces irreconcilable differences with his wife, his wife in turn, infuriates his father, straining his marriage even more.
After Jang mends his relationship with his wife and finally finds marital bliss, he learns about his wifes distasteful past and heads to divorce court.

Marriage in crisis: Byeon Chang-soo and Hong Gyeong-soo
A couple married for 10 years.
A clueless wife married to a genial husband.
All the love in their marriage has been sapped away and they have no feelings for each other whatsoever.
The husband has serious debts that he accumulated from speculating in the stock market.
Due to his debts, he eventually loses his job whereupon his wife decides to divorce him.
But they overcome their financial crisis and find that they still do love each other until death do they part.

Marriage interrupted: Jang Yeong-shik and Na Ok-bong
A self-made millionaire doctor and male chauvinist married to an obedient wife who will stand by her man.
Ok-bong devoted her entire life to her husband and she served him in whatever way she could for 30 years.
But when she lives together with her utterly obnoxious daughter-in-law, she finds herself getting mad at her, which also opens her eyes to the pathetic life she had life until now.
She unleashes her pent-up anger towards her husband and demands a divorce.

Married for money: Hong Jin-soo and Na Ye-joo
An average man who cares about love more than anything else is married to a woman who cares about money above anything else.
Ye-joo is a successful plastic surgeon and a highly desirable bachelorette.
But Jin-soo, an average dude with an average job, pursues her relentlessly, professing his undying love for her.
But Ye-joo keeps angling to find a highly desirable bachelor but gets a rude wake-up call when she finally dates a guy with all the attributes she wanted in a man.
She realizes what really matters in a life partner.

Outsiders: Na Bong-goo and Koo Jeom-soon
The husband lives with an inferiority complex and is unwelcome in all social circles and married to a pitiful woman who has constantly been used by all the men she used to date.
They wish to lead normal lives and raise a family but they find it hard to conceive a child and so they go on living listlessly in their childless marriage.
They show that love starts from the simple things in life.

Episode 1 On Poong-ja's 35th wedding anniversary, she brings out letters written with the resolutions of her children, promising to fulfill them within a year. She brims with high expectations that they'll deliver on their promises. Min-soo, the eldest daughter, goes to see Ki-wook, her boyfriend of 7 years, and expects him to propose marriage to her. However, Ki-wook was already approached by Mrs. Oh, the matchmaker, with an attractive proposition so now he has other plans...
Meanwhile, Yoo-jin just got discharged from the army where he was a medic and tells his cousin Ye-joo about his career goals.

Episode 2 Poong-ja proudly tells her fellow friends at aerobics class that her eldest daughter, Min-soo, will marry a government prosecutor soon. Meanwhile, Yoo-jin meets Na-ri, the daughter of a wealthy hotel developer and unbeknownst to him, the "coincidental" meeting was set up by his father, In-shik.
Meanwhile, Jin-soo, who is an intern at a test preparation firm, works hard to meet his sales target, which would let him be hired as a salaried employee. But when he overhears his boss say that he intentionally lied to the interns that they would be hired if they met their targets, he swings his fist at him and....

Episode 3 Poong-ja forces her daughter Min-soo to take her to Ki-wook. When they arrive at Ki-wook's tiny apartment, Poong-ja lectures Ki-wook and recounts the sacrifices that Min-soo made to support him as he tried to passe the bar. But Ki-wook doesn't bat an eye. Infuriated, Min-soo jumps and hits Ki-wook hard with a flying kick.
Meanwhile, Chang-soo tries to appease his wife Gyeong-soo after he lost all of their savings by speculating in the stock market. But Gyeong-soo simmers with anger at Chang-soo...

Episode 4 Man-bok and his wife Poong-ja go to a resort on their 35th wedding anniversary day. Their children enter a contest where the first prize is a special therapeutic bed, which they think their parents will love to have. While In-shik and his wife and son are having an important dinner with Na-ri and her parents, he gets into a quarrel with Man-bok's grown children because they are making a racket there.
Meanwhile, Yoo-jin tells his parents that he is not interested in getting married for the time being...

Episode 5 Min-soo and his cousin hang out with Yoo-jin and her brother at a beachfront resort. After splashing around in the water, everybody gathers around a campfire to dry themselves. Ye-joo asks Jin-soo what he does for a living, which takes him by surprised. Jin-soo, who is jobless, lies and says he's a freelancer.
Meanwhile, Yoo-jin tells his father In-shik that he finally found what he wants to do with his life. He says that he wants to become a travel writer. Stunned by his son's words, In-shik slaps Yoo-jin with all his might. He angrily berates his son for disappointing him after he spent hundreds of thousands of dollars to pay for Yoo-jin's college and medical school tuition for 6 years.

Episode 6 Gyeong-soo goes to the market with Poong-ja and she intentionally mentions that her daughter Woo-ran needs new sneakers. So Poong-ja buys a pair of sneakers for her granddaughter. While having dinner with Na-ri, Yoo-jin tells her that he's not interested in marriage and that perhaps she should date someone else.
Meanwhile, Gyeong-soo and Jin-soo are stunned to hear that Min-soo will get breast implants. But Min-soo tells her siblings the reason why she's getting breast plants by recounting what her ex-boyfriend Ki-wook told her when he dumped her...

Episode 7 Poong-ja gets into a heated argument with Min-soo over her decision to get breast implants and Min-soo runs out of the house at the end. Na-ri meets Yoo-jin's cousin Ye-joo and tells her that she really wants to marry Yoo-jin and would like her help to win him over.
Meanwhile, Gyeong-soo quarrels with her husband, Chang-soo over how much allowance he gets a month. Gyeong-soo tells him that she won't raise his allowance so Chang-soo says that he'll take on a second job picking trash and selling them to a recycler...

Episode 8 Yoo-jin goes to a Taekwondo Gym to return Min-soo's cellphone to her and somehow they have drinks together. After they both get a little drunk, Yoo-jin kisses Min-soo all of a sudden...
Meanwhile, Chang-soo hits upon the idea of working as a hired driver after work because his wife Gyeong-soo won't raise his monthly allowance. Na-ri buys expensive abalone and decides to go over Yoo-jin's home and cook it for him and his family to win him over...

Episode 9 Poong-ja goes to see Yoo-jin and pressures him to do the decent thing after he slept with her daughter. Since he doesn't remember anything that happened the night before between him and Min-soo, he is stunned by what she says. He tries to talk his way out of it but Poong-ja cuts him off and demands that he pay for Min-soo's boob job. Her surprising demand makes him sigh with relief.
Meanwhile, Chang-soo learns how to be a hired driver and start right away. But his wife Gyeong-soo believes that Chang-soo is taking Chinese language classes after work and that is the reason why he comes home late. So she packs him a dinner bag to encourage him to study hard and get a promotion at his company by learning Chinese.

Episode 10 In-shik takes his son Yoo-jin to his grandfather's grave where he has a heart-to-heart talk with him about how his own dad let him down a lot and this motivated him to become a doctor and raise his social status so that people wouldn't look down on him for being poor. He asks his son to understand why he wants Yoo-jin to do the right thing. But Yoo-jin asks his dad to respect his decision and stop pressuring him to pursue a lucrative career that doesn't hold any appeal to him...
Meanwhile, Hee-sook meets Gyeong-soo and offers to get her husband Chang-soo promoted at work if she succeeds in convincing Min-soo to marry Hee-sook's brother-in-law...

View all 321 pictures for "Life is Good"