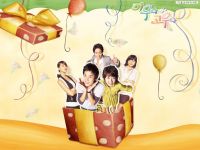 Alternative title : "I Hate You, But It's Fine".

This is a story of a remarried couple that decides to start a life together despite differences in background and values. After becoming a member of his stepfathers family, which was eager to have a son, Baek-ho goes through a difficult process of gaining its recognition. But that process teaches the genuine meaning of family, which is not defined solely by blood relation and family name, but by pain-sharing, affection and sincere concern. Always counting on his luck and having no occupation, Baek-ho one day meets the most powerful rival in his life, Dan-pung, and eventually succeeds after starting from scratch. The drama also shows what we should pursue in our lives by depicting the success and failure of another character, Seon-jae, who chooses money over love believing that money is power.

Kim Ji-seok
Kang Baek-ho: Too good-looking for a jobless and flippant guy, Baek-ho squanders his time by frequenting race courses on weekends. He has a cheerful, upbeat and affectionate personality and a warm heart. One day good fortune smiles on him: he becomes the stepson of a man from a family that owns a conglomerate. But just when things seem to be perfect, he meets the strongest rival in his life  Na Dan-pung.


Han Ji-hye
Na Dan-pung: Having a smart and outgoing elder brother, Dan-pung knows how to adapt quickly and read other peoples minds. She is a very ambitious and witty young lady who also knows how to be sweet. She has achieved everything she wanted so far through a hard work and arduous effort. All she has to do now is find her Mr. Right. She likes guys who have clear goals in life and strive to achieve them. But her life changes completely when she meets Baek-ho, the exact opposite of her Mr. Right.

Jo Dong-hyeong
Na Seon-jae: Good-looking with sophisticated manners and gentle charisma, Seon-jae works as a fund manager. He earned an MBA degree from a U.S. university and has won all bets so far thanks to his shrewd, smart and meticulous mind of an expert investor. He even turned away from his longtime love for the sake of success. His relentless pursuit of money as a means of power and authority has sparked conflicts with his father, who has lived all his life in an honest way.

Likable or Not | Cast

Likable or Not | News

Likable or Not | Shopping

Likable or Not | Soundtracks, OST (Sponsored)

Likable or Not | Pictures

View all 114 pictures for "Likable or Not"

Likable or Not | Links | Suggest a link

Likable or Not | Reviews

Likable or Not | Facts

Likable or Not | Community