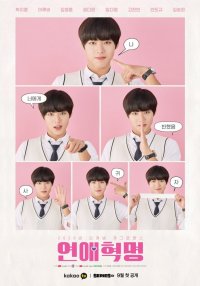 30 episodes - Tue, Thu
Adapted from the webtoon "Love Revolution"
Synopsis
It's a new concept of comedy romance that captures teenage romance, friendship and dreams centered on a cute and lovely couple who fell in love with Wang Ja-rim, the goddess of information. Open on Kakao TV and Naver Series On.

View all 103 pictures for "Love Revolution"