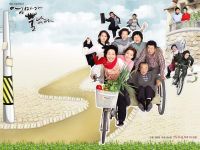 Alternative title : "Mom Has Grown Horns".
Synopsis
A story about a family living in the era that analog and digital generation coexists.
An honest, hardworking father and a thrifty, selfless mother have lived all their life praying for success and better lives of their children. When the parents look at their children and the rest of younger generation, who have a strong sense of self, they are disgruntled but envious at the same time.
Under one roof, there are two different generations live together. They present various forms of lives and love, and go through many incidents. Watching the analog and digital cohabitation will amuse the viewers. Times has changed and so have the values. Amid such changes, the family love has become even more important. The story about this family will remind us to look back on our own family and the happiness.

He managed to get a high school diploma. He retired after working as a civil servant at the state-run rail corporation all his life.

The man is an epitome of honesty and diligence. He is warm-hearted and gentle. He avoids confrontation at all cost.

To Il-seok, his family is his world and universe. He literally raised his brother Sam-seok, who is 15 years younger than he is. However, Sam-seok doesnt seem to appreciate his brothers care.

She was born in a poor family. After graduating from the high school, she started as an accounting clerk at a printing shop. At the age of 25, Han-ja married her high-school sweetheart Il-seok, who was her friend Yi-seoks twin brother. Two years later, she had her first child. All her life, she was busy with the care of her own three children plus her brother-in-law. In addition, she worked part time at a dressmaking shop. A few years ago, she ran a small cosmetic shop but didnt do well because she trusted people too easily.

She starts to regret how she has lived her lifethe life she lived for other but not for herself. She is going through changes, which havent surfaced fully yet.

Her only joy in life is reading. Whenever she has a spare time, she reads. Thanks to her extensive reading, she has highly-developed language skills.

She is close to her father-in-law as if he wer her own father.

At a tender age, he started as an apprentice of an ironsmith. He worked as a maker-up and a printer at a local printing shop. Then, he got a drivers license and began working as a driver. Before retiring, he chauffeured for a businessmen for 25 years. He led an honest life.

He is open-minded and well-versed in current events. He is grateful for his daughter-in-law Han-ja, who sacrificed herself to look after the family. He is closer to her than to his own children.