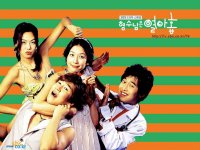 A romantic comedy about two future 19-year old sisters-in-law! A thrilling story of youngsters trying to realize their small yet

significant dreams! Because Kang-pyo needs a monthly treatment for his heart disease, they go to a hospital in Seoul every month.

The thought of going to a hospital is very exciting for Yu-min since she sees her prince charming, Min-jae, who is a resident

doctor at the hospital. Yu-min has had her eye on him for almost a year. Almost like a cute stalker, Yu-min stays close to Min-jae.

Finally, she decides to pretend to be a student at the university that Min-jae attends. Although she feels guilty about lying,

Yu-min now has more chance to see Min-jae outside of the hospital. Min-jae？s mother forces him to get engaged to

a daughter of the CEO of a car manufacturing company, so that her business can benefit from it. To free himself from

his mother？s constant requests, Min-jae offers Yu-min a part-time job as pretending to be his fianc？e until the girl

he loves returns to him. However, Min-jae finds out that Yu-min is still in high school, and most surprisingly,

in the same grade as his younger brother, Seung-jae？