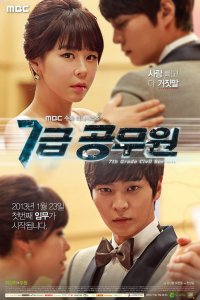 20 episodes - Wed, Thu 21:55
Previously known as "The Secret Lovers" (비밀남녀전, Bi-mil-nam-nyeo-jeon)
A drama based on the movie "My Girlfriend is an Agent". Synopsis
Synopsis
"7th Grade Civil Servant" is a romantic action drama of young agents starting their career in the National Intelligence Service. It is not about the profound philosophy of life nor hidden secret of the birth. This is a blockbuster action-melo drama covering from capital to local, Eastern to Western. They not only pass the boundary of life and death but their everyday life is a breathless thrill with secret projects. This drama reveals the double life they have been hiding behind the fake identity. They are undercovering as the ordinary sales people dressed in slick black suits. But they are more than just men in black.

Starring
KIM Seo-won (actress Choi Kang-hee)
She joined the National Intelligence Service as a stepping stone to her eventual dream job at a network station. Having bouts of hysteria, she becomes an NIS agent to pay back her college loans. Although she lives off of a small budget, she carries herself with a lot of pride. Her father is prone to getting into messy situations that hurt the familys finances while her mom urges her to be the breadwinner of the family. Her life is a bed of rotten, thorny plants. She took the NIS entrance exam on a whim because it was similar to the network stations exam for aspiring documentary filmmakers. To her surprise, she passes the NIS test. And she encounters the hateful Han Gil-lo at NIS headquarters.

HAN Gil-lo (Actor Joo Won)
He is an agent with an attitude who aspires to be like James Bond. His life motto is to enjoy life to the fullest. He is good-looking, smart and comes from a rich family. Therefore, he always got whatever he wanted. And he thinks that being a spy would make his life complete. His turning point in life came when he saw a Bond movie as a little kid. So he promptly trained in gun-shooting, ultimate fighting, extreme sports, car racing and more to become an NIS agent. But he did not excel academically and thus, failed the NIS entrance exam. After two more attempts, he finally passes the test and is reunited with Seo-won, with whom he shares some bad blood with.

GONG Do-ha (Actor Hwang Chan-sung, member of 2PM)
As a former paramilitary trooper, he fought in Afghanistan and Iraq and was a special ops instructor in charge of hand-to-hand combat training. He is also a special ops sniper! He joined the National Intelligence Service to serve his country in flying colors. He looks down on agents who were hired by the NIS based on their academic scores. But he feels sympathy for Seo-won because she struggles to make ends meet. But for some reason Seo-won is always partners with Gil-lo. When he was in the special ops, he was told to love thy comrade no matter what but he cant stop disliking Gil-lo.