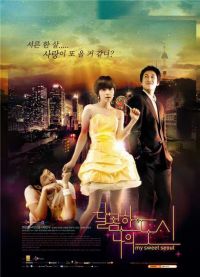 Oh Eun-soo(Choi Kang-hee) is 31 years old and worked at the same company for seven years. Life starts to get tremendously stifling for her. Her boss criticizes her for being dense and those words undermine her self-esteem, which was low to begin with. The new hire makes her look bad by working hard and showing passion for her job. But she gets worse news when her ex-boyfriend, who always said that marriage was a dead-end street, invites her to his wedding. But the double-whammy comes when her best friend, Jae-in(Jin Jae-young), also announces that shell be getting married! Right when she needed a little tender affection, several men enter her lives with amorous undertones.
She has a one-night stand with Tae-oh(Ji Hyun-woo), a younger man who she met at a bar. Kim Young-soo(Lee Sun-gyun), who was introduced to her by her boss, enters her life as another option for love. Then Yoo-joon(Kim Young-jae), a friend she has a platonic relationship with, suddenly proposes marriage to her. Deluged with so many options, she has to wade through the complicated courtship rituals to find the person who shell spend the rest of her life with. Its not easy to choose Mr. Right. Yoon Tae-oh, Nam Yoo-joon, and Kim Young-soo...
As if she is answering a multiple-choice question, she looks quizzically at the names of the three men in her life. But the men have their charms and flaws, which makes it doubly hard to just follow her heart.
Who will Oh Eun-soo choose? What will happen to her friend Jae-in, whose marriage fell apart in months, and Yoo-hee(Moon Jung-hee)s career as a musical performer?

View all 180 pictures for "My Sweet Seoul"