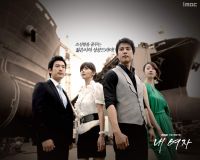 As a modern remake of the 1980s hit drama, Terminal Point, Sea of Ambition is set in a shipbuilding yard. Terminal Point had the highest ratings back in its day.

Hyun-min (actor Koh Joo-won) lost his father at sea when he was a young boy and ever since that loss, he vowed to build safe and reliable boats. But his dreams of designing ships and living happily with the woman he loved were taken away from him. He rebounds from these huge setbacks and the drama follows his life as he sets out to become a tycoon in the shipbuilding industry.

Kim Hyeon-min / actor Koh Joo-won
A ship designer at Dongjin Heavy Industries who is obsessed with ships.
He currently works as a ship designer at the design arm of Dongjin Heavy Industries. Later on, he becomes a key ship designer and the company regards him as an important asset. Chairman Jang of Dongjin puts his trust in him and Hyun-min displays a strong character with healthy values. His dedication in designing ships goes beyond making commercial tankers. He also designs destroyers, frigates, submarines and aircraft carriers.

Yoon Se-ra / actress Park Sol-mi
Team member, Shipbuilding Department, Planning Team, Headquarters, Dongjin Heavy Industries
A woman with an evil streak that she hides behind her angelic face. With her stunning looks, she is also fluent in English, Chinese, and Japanese. She has an inferiority complex about being from a poor family and she works hard to become a member of the upper class. She is obsessed with becoming an elite ember of society. She pours her energy into learning new languages to raise her social status.
She dearly loves Kim Hyun-min and plans to marry him.

Jang Tae-sung / actor Park Jeong-cheol
Eldest son of the founder of Dongjin Heavy Industries and future successor.
His ambition is to make Dongjin Group, which is currently ranked as number 50 in terms of revenues, one of the top 10 companies in the country. His strategy is to increase the scale of the shipbuilding business at Dongjin Heavy Industries.
He has an overbearing personality but he is a gentleman in every way.
He received his college degree from an American university and gained work experience in management while he was there before he returned to Korea.
Upon returning to Korea he fell in love with Yoon Se-ra. Once he makes up his mind, he will use any methods to get what he wants.
That inevitably leads him on a collision course with Kim Hyun-min.

Jang Tae-hee / actress Choi Yeo-jin
The youngest daughter of the founder of Dongjin Heavy Industries. She is Tae-sungs sister.
She is keenly interested in who will become the successor of her fathers company. That is why she divorced her husband, whom she married through an arranged marriage, after just six months of marriage because he lacked ambition. Though she is the daughter of the chairman, she wants to succeed her father as the next president of the company.
She takes on the role of being the head woman of the household and she follows her father to every meeting he attends. She has wide influence in the company. She starts to focus on the shipbuilding industry to counter her brothers ambitions. She is drawn to Kim Hyun-mins warm character.
She is profoundly moved when she sees Kim Hyun-mins deep passion for ships and his ambitions to achieve more.

Hong Min-ye / Choo Sang-mi
A woman of mystery
Possessing stunning beauty, she has a curvy, sensuous figure, which gives her the look of a woman who is wealthy and powerful.
She oversees $500 million in cash as one of the hidden hands in the financial market. She has contacts with many influential people in politics, law, and finance. She runs an investment company and acquires debt-ridden and poorly managed companies, which she sells at a profit by hiring managers to improve the bottom line of these underperforming companies.

Episode 3
Yoon Se-ra looks out to sea and sees Kim Hyun-min and Jang Tae-hee enjoying a yacht cruise. She cries on her way back on the bus.
Chairman Jang demotes Jang Tae-hee to a position at one of the companys hotel concerns and this deeply affects her. Jang Tae-hee goes to see Kim Hyun-min late at night and confesses her feelings to him but Kim Hyun-min rejects her as gently as possible.
After being appointed as the managing director, Jang Tae-sung bumps into Yoon Se-ra at the companys elevator accidentally...

Episode 5
The Dongjin Group executives try hard to persuade Mr. Philips not to sign a ship contract with Shinsung Heavy Industries. Kim Hyun-min, Jang Tae-sung, and Jang Tae-hee celebrate the successful deal with Mr. Philips at a hotel nightclub but Yoon Se-ra is not invited.
As Yoon Se-ra gets worried about the relationship between Kim Hyun-min and Yoon Se-ra, she decides to go to the hotel to check on them but she is shocked to see Kim Hyun-min helping a tipsy Jang Tae-hee get back to her hotel suite.

Episode 6
Jang Tae-sung praises Yoon Se-ra for her key contributions in helping the company clinch the ship deal and gives her an expensive hotel membership card as a gift. When Kim Hyun-min finds out about the gift he angrily tells Yoon Se-ra to return the membership card but Yoon Se-ra refuses to give it back. On Kim Hyun-mins birthday, Yoon Se-ra decides to go see Kim Hyun-min instead of finishing an assignment that her brother Jang Tae-sung gave to her. On her way there, her brother calls her she reluctantly heads back to the office. She finds Jang Tae-sung sitting alone in his office with the lights turned off...

Episode 7
Kim Hyun-min tells Yoon Se-ra that hed like to hold their wedding as soon as possible but she tells him that her career is more important and refuses to marry him so soon. Chairman Jang tells Jang Tae-hee that he approves of Kim Hyun-min as his future son-in-law and urges her to set up a meeting with Kim Hyun-mins parents so that he can meet them and set the wedding date. Jang Tae-sung and Yoon Se-ra succeed in winning an order from Wang Sheng Shippers and they celebrate the occasion. After they both get drunk, they head to a hotel suite together...

Episode 9
Yoon Se-ra breaks up with Kim Hyun-min with an icy demeanor.
Kim Hyun-min gives a wedding invitation card to Jang Tae-hee for his wedding with Yoon Se-ra to show her whom his heart belongs to.
Hong Min-ye takes an interest in Kim Hyun-min, whom she think has the talent to run a shipyard, as she prepares to take over Shinsung Heavy Industries. Meanwhile, Kim Hyun-min is arrested as a suspect by the KCIA for leaking sensitive technology in an industrial espionage case.

My Woman | Links | Suggest a link