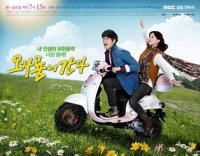 120 episodes - Mon~Fri 20:15
Also known as "Here Comes Mr. Oh"
Synopsis
A story about Oh Ja-ryong, a gregarious and good-natured fellow who stands up to his conniving brother-in-law, Yong-seok, who plots to steal the estate of his wifes family. By juxtaposing Oh Ja-ryongs pure heart and devotion to his wife with Yong-seoks greed and superficial love towards his wife, there is a profound lesson to be learned through this drama.

Oh Ja-ryong (Actor: Lee Jang-woo)
He marries the second daughter of his mothers best friend. Although he has a tendency of exaggerating things, he has a warm personality and friendly disposition. He carries himself around with confidence. Hes tall, handsome and served in the Special Forces during his mandatory military service. But currently, hes unemployed and searching for a job. But hes hopeful that things will turn around in his life. After meeting Na Gong-ju, his life has become very complicated.

Na Gong-ju (Actress: Oh Yeon-seo)
She grew up like a princess by her doting parents. So shes self-absorbed and self-centered. But at home, she gets all the attention with her adorable behavior. She has never experienced hardships so shes a bit naïve about lots of things in life. In sum, shes a snobby rich girl who wouldnt be able to survive without her parents money. She becomes curious about Oh Ja-ryong whom she encounters several times while visiting her dads company. They say that a series of coincidences will eventually turn into a real connection.

Jin Yong-seok (Actor: Jin Tae-hyeon)
Hes married to the eldest daughter of Mrs. Jang Baek-ro. He was the school valedictorian in high school and went to college on a full scholarship. He later received a grant to study abroad with all expenses and tuition paid for. He dated Kim Mary during his study abroad years because he found her to be a kindred spirit who went through similar experiences he had. After getting his masters degree, he gets a lucky break by joining a Wall Street investment firm. But he is fired over a blunder he made. Having no sponsored visa, he has no choice but to return to Korea. And life in Korea is a big letdown for him. Tired of his dead-end job, he tries to marry the the daughter of the AT Group chairman, which is something his mother also wants.

Na Jin-ju (Actor: Seo Hyeon-jin)
Shes intellectual and elegant. As a professor of modern dance, shes a nice person with a stubborn side. She had a teen crush on her tutor, In-guk when she was in middle school but due to her familys disapproval, she was prevented from meeting him when she was old enough to date guys. After a series of perceived coincidental encounters with Yong-seok, she is mildly interested in him because of his polite manners but deep in her heart, she still longs for In-guk.

View all 5 pictures for "Oh Ja-ryeong is Coming"