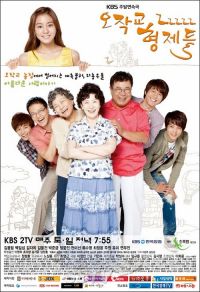 Also known as "Ojakgyo Family"
Previously known as "Golden Pond" (황금연못, Hwang-geum-yeon-mot)
58 episodes - Sat, Sun 19:55
Synopsis
It's a family drama about passionate mom Park Bok-ja, father Hwang Chang-sik and their four sons who live in Ojakgyo Farm near Seoul. One day, one girl named Baek Ja-eun comes into the farm and she stirs up the drama! The drama doesn't stop there. Also Kim Mi-sook moves into the outbuilding of the farm and Grandma, Shim Gap-nyeon, who is stern and unbending always tortures Bok-ja. The family with many troubles like a bomb which we never know when to blow! Their unpredictable daily life story is what makes this drama fun. This drama will portrait the family who fights to regain their farm and, by doing so, remind you the importance of family.

View all 825 pictures for "Ojak Brothers"