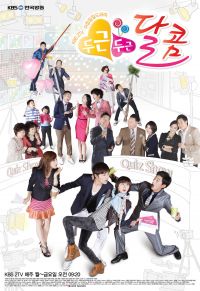 Previously known as "Sweet Pitapat" on HanCinema
Mon~Sat 09:20
Synopsis
A Glad To Love You follow up. Jo Ha-rang is the ex-wife of the lead male and conglomerate, challenging herself to an extreme change.
Kim Minju is a successful producer at a broadcasting station with a sad and painful past. Years ago, her ex-boyfriend left her in shambles. Since then, she decided never to believe in love again. She laughs at her own past humiliation. Meanwhile, Jung Dohyung, Minju's boss, had a heart transplant and strange things began to happen. His eating habits, the way he talks, and his sense of taste have all been changed! He starts to fancy spinster, Minjoo. After the heart transplant surgery, cellular memory phenomenon made him fall in love with Minjoo although she is not his type. Meanwhile, Minjoo finds Dohyung is much alike to her ex-boyfirend, Gihun. She is confused initially but she slowly starts to fall for Dohyung too. She then finds out the story behind Gihun and her breakup previously unknown to her.