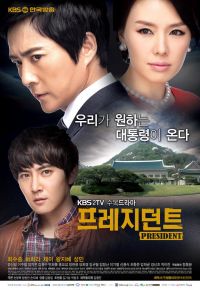 24 episodes - Wed, Thu 21:55
The drama follows the presidential election process to shed light on the right way of politics, the qualifications of a future Korean president, and also the personal tribulations and ambitions of politicians hidden behind the power struggles.

Korean politics went through volatile changes over the past decades since Korean independence from colonial Japan. Experiencing the Korean War and numerous political uprisings and events, Korea achieved democratization at the fastest speed in the world.

However, in the modern day, Korea is mired in serious political distrust and even hatred. The public loves to bash politicans, which from another viewpoint implies a keen interest in politics more so than anywhere else in the world.

Particularly during the presidential campaign period, the whole nation turns into a political furnace as everyone from taxi drivers, the elderly, mothers and even the homeless have their say about the candidates.

The presidential election is more dramatic that fictional TV dramas and is an exciting game unfolding in real life.

Regions, generations and ideologies clash during campaigns and people are frantic and enraged by the outcomes. Some shed tears of joy and others of sorrow. This is a political drama and the first of its kind to squarely focus on the presidential election, where emotions and energy run high.

The nation has had ten presidents over the past half century and the political history has been more than tumultuous.

People may have different assessments for each president but most of the leaders had an unhappy ending to their lives. One president was impeached by public protest and another president who is regarded to have conquered the nation's 5,000 year-long history of poverty was assassinated by a close aide and is remembered as a dictator.

Two other presidents who waged military coups eventually went to prison and two others, who were for many years opposition leaders before becoming president, also were far from adored because of the financial crisis in the late 1990s and their sons' corruption.

And the president who was revered by youths and netizens threw himself from a rocky mountain and took his own life. The president is not a god, so he cannot make all public wishes come true, yet the public still expects such omnipotence from him.

This is because the reality we live in so tough and rough. We the people long for a leader who speaks of future hope. This drama came about due to this desire and longing.

Such a god-like president may not exist in the real world, but he or she can be portrayed in a drama to give viewers dreams and hope.

The drama will unveil all the dirty slander occurring on the presidential battleground and feature a true patriot who maintains the right way and faith toward victory.

View all 467 pictures for "President"