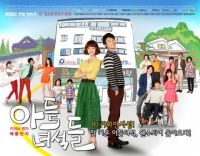 50 episodes - Sat, Sun 20:40
Also known as "The Sons"
Synopsis
A married man decides to move out of his house to get away from his wife. Meanwhile, his eldest son is widowed and has vowed to never marry again. His second eldest son is disinterested in getting married while harboring a secret crush on his friends girlfriend. Then there is his youngest son who has been once divorced but pretends that he has never been married before so that he could enhance his attractiveness among women. Somehow, all the male members of the family have had relationship problems and through their personal stories, this TV miniseries will try to enlighten viewers on how marriage is a constant work in progress.

Yoo Hyun-gi (Actor: Lee Seong-jae)
A dentist. He lost his wife in an accident four years ago and has stayed unmarried due to the memory of his late wife. After meeting the widowed Sung In-ok, the two begin dating but Hyun-gis daughter, his late wifes mother and brother play a big role in his life which makes it difficult for him to take the next step in his relationship with In-ok...

Sung In-ok (Actress: Myeong Se-bin)
Graduated from music school and began teaching piano to kids after the death of her husband. Even after her husband died, she continued to live with her in-laws and stayed steadfast in her resolve to spend the rest of her life with her late husbands family, which used to be the tradition long ago but not any longer. She is a diehard traditionalist. However, her resolve is shaken when she meets Hyun-gi who has a striking resemblance to her late husband.

Yoo Min-gi (Actor: Ryoo Soo-yeong)
Romance novelist. He is the only son in the Yoo family who has not married yet. Meanwhile, his father lives separately from his mother, his younger brother is divorced, and his widowed older brother shuns the idea of getting remarried until the day he meets Sung In-wook. This family history has made him skeptical of love and marriage. So even when he develops a crush on his friends girlfriend, he lies to himself that he is not in love.

Yoo Seung-gi (Actor: Seo In-guk)
Golf instructor. He was born with a roving eye and began cheating on his wife when they were newlyweds. After having had enough of his cheating ways, his wife files for a divorce in the third year of their marriage. He pretends to battle for custody over his son, but in reality, he was hoping that his wife would get child custody so that he could return to the life of a carefree bachelor. Then all of a sudden, his wife comes down with a terminal disease, making it impossible for her to care for their son. So he takes full custody of his son and finds himself feeling pity and compassion for his wife, and gradually, his love for her is rekindled...

View all 390 pictures for "Rascal Sons"