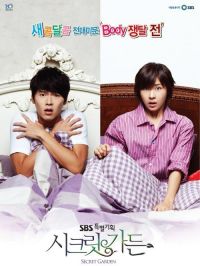 20 episodes - Sat, Sun 21:50
Synopsis
This quirky, high concept drama follows a neurotic businessman and a passionate stunt woman who come to possess each other's hearts and bodies...literally! Kim Joo Won is the arrogant, eccentric heir to a large company. Poised to inherit a large department store, he constantly rejects the girls his matchmaking mother sends his way. When he meets Gil Ra Im, a beautiful, driven stunt-woman, she changes his life, as he becomes fascinated by her strength and vulnerability. Ra Im wants nothing to do with this oddball, drawn more to his pop-star cousin Oscar, whose music she admires. Ra Im and Joo Won are thrown together when, due to a magical accident, they end up switching bodies. Now, they'll have to live each other's lives, coming to know each other (and themselves) in the process better than they would have thought possible...

View all 446 pictures for "Secret Garden"