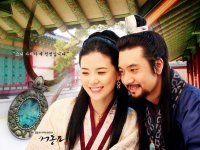 SBS title : "Song of the Prince"

The Ballad of Seo Dong was a song that was used by an ambitious young man called Seo Dong to marry a beautiful princess called Seon-hwa 1400 years ago. The lyrics of the song are written below. The behind story of Ballad of Seo Dong. Seo Dongs real name was Jang (璋) and he later became the 30th King of Paekche who was called King Moo.

He was a talented person who had the makings of a great leader but he made a living by selling horses as a youth. The commoners simply called him Seo Dong. After hearing about the remarkable beauty of Princess Seon-hwa, who was the third daughter of King Jin-pyeong of the Silla Kingdom, he shaves his hair to disguise himself as a Buddhist Monk and slips into Silla to take her as his wife. He befriends the children in the capital of Silla by giving away horses and teaches them a simple song.

The name of the song is the Seo Dong song. Word of the scandalous song soon reaches the royal palace of Silla, and the princess is exiled to a faraway place. The queen gives the princess a bar of gold before she is exiled and during the princesss journey, Seo Dong appears and persuades her to follow him. Though the princess has no idea where Seo Dong was from, she thinks it would be nice to have a friend on her long trip and follows him. The princess takes a liking to Seo Dong because he proves to be trustworthy and they eventually get married. Later, she learns that his name is Seo Dong and realizes how a simple song brought them together.

View all 102 pictures for "Seodongyo"