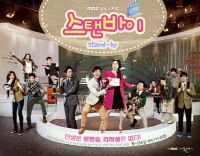 120 episodes - Mon~Fri 19:45
Synopsis
Families that are composed of single people, single parents and couples without children are becoming the norm. The true meaning of family has started to fade away. This sitcom tells the story of ordinary people; a newscaster whose promotion is put off and is left with the son of the woman, whom he was hoping to marry. There is a new woman at work who has a crush on him. Then there is the man who is successful in his career, but very lonely. The drama shows viewers that they are not alone in their struggles and that the world is worth living.

Ryu Jin-heng (Actor Ryoo Jin)
Jin-heng is a reporter for TV11 but aspires to become the main anchor of the primetime nine oclock news show. However, he is stuck as the host of an unpopular TV program while also relegated to the duty of announcing the time on radio segments. Not only are the people who were hired when he was ahead of him by getting promotions, but also people who joined later have leaped over him at work. The stress is unbearable. He also has an obsessive compulsive personality.

Ryu Ki-woo (Actor Lee Ki-woo)
Ki-woo is Jin-hengs younger brother. He is optimistic and laid back. He is a bit shameless, and likes to crack jokes. Ki-woo is a womanizer who dates several women at the same time. He remembers the tiniest detail about women, but hardly cares about the lives of his guy friends.

Ha Seok-jin (Actor Ha Seok-jin)
Seok-jin is the main male host for TV11s The Queen of Current Affairs and one of the countrys top news anchors. He was chosen as the most wanted guy as a husband and son-in-law in the nation with his outstanding background, polished delivery skills, chiseled looks and athletic body. Unlike Jin-heng, who is derided by his peers, he is admired by everyone.

Kim Soo-hyun (Actress Yoo Ri-el)
Soo-hyun is a producer for variety shows and the creator of The Queen of Current Affairs" show. She is very straightforward and says what is on her mind. That is why she was nicknamed the bachelor. Seok-jin, the perfect anchor, expresses his interest in Soo-hyun. However, she is slow in catching on. She nervously hovers around Jin-heng, the guy she had a crush on forever.

Jung So-min (Actress Jeong So-min)
So-min seems very urban at a glance with her chic looks, but she is actually from the boondocks of Gangwon Province. She moves to Seoul to pursue her dream of becoming one of the top bakers. However, she gets fired from all her jobs. Just when she was ready to give up, Jung-woo (Jin-hengs father) gives her a part-time job at his bakery.

Lim Si-wan (Actor Si Wan)
Si-wan is the most popular kid in his high school. Hes on the honor roll and is a great athlete. Si-wan plays the violin, sings and dances like a talented teen idol. Hes excellent at everything. It is not a big surprise that he is popular to girls but he isnt interested in then at all. He was devastated when his mom died in a car accident right before her wedding to Jin-heng. But that was only the beginning of his trials.

View all 67 pictures for "Standby"