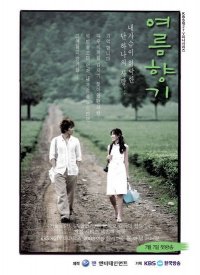 Art director Min-Woo (played by Song Seung-Heon) lost his fiancée in a car accident. Later, on a trip to the mountains, he meets florist Hye-Won (played by Son Ye-Jin) and falls in love with her. Hye-Won had received a heart transplant, and coincidentally it was the heart of Min-Woo's late girlfriend.

From the first moment they meet, Min-Woo and Hye-Won are attracted to one other and the attraction continues to deepen. But Min-Woo is also loved by Park Jeong-A (played by Han Ji-Hye), while Hye-Won is the object of Park Jeong-Jae's affection (played by Ryoo Jin). Adding to the tragic twist of fate, Jeong-A and Jeong-Jae are brother and sister. The destinies of these four are sadly and ironically intertwined. Min-woo and Hye-Won do not act on their feelings however, out of consideration for Jeong-A and Jeong-Jae. Meanwhile, Hye-Won learns that she had received the heart of Min-Woo's late fiancée and tries to convince herself that Min-Woo is still emotionally attached to the dead woman. Even though they are in love, they cannot commit to a relationship because of Min-Woo's feelings for the dead fiancée as well as for others members of their group who are concerned for them.

When problems arise with Hye-Won's new heart, she is hospitalized. Min-Woo blames himself. Wishing Hye-Won and Jeong-Jae a happy future together, he leaves Korea. As Hye-Won's condition worsens and she feels there is no hope of survival, she lets Min-Woo know that she is dead. While he is abroad, Min-Woo learns that Hye-Won died, which causes him great heartache. He is not aware that Hye-Won has received another heart transplant, this time an artificial one, and miraculously recovers. A few years later, Min-Woo returns to Korea. Outside a concert hall, concert-goers hold umbrellas in the pouring rain. As people climb up and down the stairs, Min-Woo and Hye-Won accidentally meet. The two feel their hearts beating again and realize that their feelings of love were true. And this time, Hye-Won's heart is her own - not the heart of Min-Woo's late girlfriend.

View all 17 pictures for "Summer Scent"