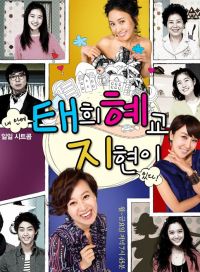 Mon~Fri 19:45 - Alternative title : "Hilarious Housewives"
Synopsis
A sitcom that revolves around the lives of middle-class housewives and their families with lighthearted stories.
Sun-gyung owns a bakery and one day her husband asks for a divorce and then disappears.
Sun-gyung finds herself thrust into the role of running her husband's talent agency as well as the bakery.
She faces incredible challenges in her new job but her neighbors Mi-sun, Hee-jung and Ji-man help her overcome them.
The show depicts the lives of five housewives with Mi-sun as the main character.

Park Mi-seon
She's the president of the neighborhood wives's club and runs a real estate agency. She's older than the other housewives and keeps tabs on everyone. Thus, she practically knows everything that goes on in the neighborhood.

Jeong Seon-kyeong
She owns a bakery but one day her husband goes missing and she finds herself running her husband's talent agency. She has a sweet, caring personality but she is not the sharpest tool in the shed.

Kim Hee-jeong
She's a full-time housewife who obsesses about providing the best education for her daughter. She's full of envy and also curious about the lives of her neighbors. She also likes to gossip about people behind their backs. But she keeps a tidy home that would make Martha Stewart proud.

Choi Eun-kyeong
She's rich and has everything that a housewife desires. Her son is a straight-A student and her husband is a high earner, making her the envy of all the housewives in the neighborhood.

Hong Ji-min
A writer for a daily radio show. Her husband Kim Kuk-jin lost his job but she tries her best to support her family as the breadwinner. She likes to get involved in matters that she feels like she can make a difference.