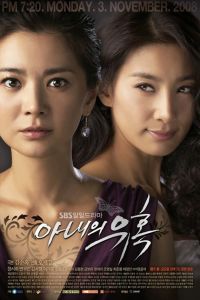 Eun-jae (actress Jang Suh-hee) majored in fashion design at a prestigious university and starts preparing to study fashion in France as a post-graduate student but she becomes pregnant with Kyo-bins (actor Byun Woo-min) child and then marries him, jettisoning her career hopes. Her in-laws are part of the nouveau riche class and lack any class but Eun-jae tries to get along with them during seven years of her marriage. Her first pregnancy, which led to her marriage to Kyo-bin, ends in a miscarriage. When Eun-jae becomes pregnant again after a long wait, she is overjoyed.
Around the time of her pregnancy, Eun-jaes best friend Ae-ri (actress Kim Seo-hyung), returns to Korea after studying in France. Ae-ri was also Eun-jaes brothers girlfriend at one time and when she left for France 5 years ago, she said a sponsor was footing the bill for her tuition. But Ae-ris so-called secret sponsor turns out to be Eun-jaes husband Kyo-bin. Eun-jae later finds out that Kyo-bin was cheating on her with Ae-ri. Eun-jae is shocked to learn of her friends betrayal because she thought Ae-ri would marry her brother, making them sisters-in-law. On top of that, Ae-ri had Kyo-bins child, a five-year-old boy. When Eun-jaes brother Kang-jae learns about Kyo-bins indecent past, he physically assaults Kyo-bin. Due this incident, Kyo-bin and his mother pressure Eun-jae to sign the divorce papers. After Kyo-bin and Eun-jae get divorced, Ae-ri doesnt find her married life comfortable because her father-in-law looks at her with disdain. While nursing her broken heart on an island, Eun-jae is visited by Ae-ri, who demands that she abort her second pregnancy and move to another country. Kyo-bin also confronts Eun-jae and takes away the wedding ring he gave her and throws it into the sea. Eun-jae jumps into the ocean to try to retrieve the wedding band because it means a lot to her. But Eun-jae cant swim and Kyo-bin doesnt try to rescue her. Eun-jae is lost at sea. Kyo-bin and Ae-ri become partners in crime and hide the terrible secret of causing Eun-jaes disappearance. They return home and tell the family that Eun-jae committed suicide.
Meanwhile, Lady Min, a wealthy woman who built a fortune in the retailing and money lending businesses, happened to be in the area near the island where she was searching for her missing daughter together with her adopted son, Gun-woo (actor Lee Jae-hwang). She spots Eun-jae floating unconsciously at sea and rescues her. After she loses her baby in another miscarriage, Eun-jae is taken care of by Lady Min and her adopted son. Eun-jae assumes the name of Lady Mins missing daughter

View all 279 pictures for "Temptation of Wife"