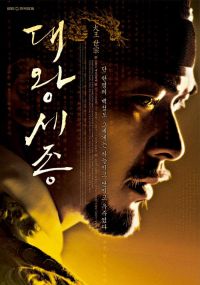 Sejong the Great is a full scale politic drama describing how King Sejong and his loyal retainers cooperate and contrive to make his dynasty a better place. While King Sejong was in throne, the Chosun Dynasty enjoyed the most fortunate and happy age ever.
The drama shows the dramatic processes of how so many new cultural heritages have been devised. At that time, Hangul, the native phonemic alphabet system for Korean language was first invented and introduced. Before it was made up, Chinese characters had been used for a written communication, which makes it extremely difficult for ordinary people to learn and use. Hangul is easy to learn for its simple and scientific principles, so wide-spread people instantly use the alphabet. Other than hangul itself, there had been so many cultural heritages created during his regime including a rain gauge, a sundial, an hourglass to name a few.
Also, King Sejongs pragmatic diplomacy is concentrated in the drama. Then, the Chosun Dynasty was facing a powerful Myoung Empire of China, and King Sejong demonstrates the essence of pragmatism with dignity.
The drama location is a real palace such as Kyungbok Palace, Changduk Palace with touches of King Sejong, so the sceneries will give much more authentic fun to the King Sejongs historical drama.

Kim Sang-kyeong (Se-Jong)
Se-jong the Great is the fourth king of the Joseon Dynasty. He is best remembered for creating the native Korean alphabet hangul, despite strong opposition from the scholars educated in hanja.

View all 253 pictures for "The Great King Sejong"