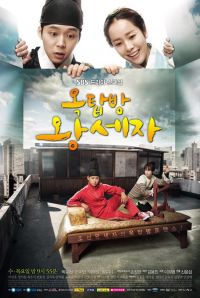 20 episodes - Wed, Thu 21:55
Synopsis
Tae-mu returns to Korea alone, claiming that his cousin and future heir of the company, Tae-yong, had gone missing. Meanwhile, Kang's personal assistant Se-na runs into her long-lost step-sister Bak-ha for the first time in 20 years at her step-father's funeral. Two years after Tae-yong went missing in New York, four men dressed in Chosun era garments, fall onto Bak-ha's delivery truck. Homeless and having nowhere to go, the four men decide to stick with Bak-ha One of them claims that he is the Crown Prince of Chosun. One day, Crown Prince Yi Gak sees Bak-ha's step-sister Se-na who is the spitting image of his late Crown Princess. He is convinced the two are, in fact, the same person. Meanwhile, Kang thinks that Yi Gak, who looks exactly like her grandson who went missing in New York, has returned. The Crown Prince realizes that he has time traveled 300 years to 2012. Seoul, to search for the truth behind the mysterious death of his beloved wife, the Crown Princess. In order to approach Se-na (the Crown Princess), who is also Kang's personal assistant, Yi Gak pretends that he is Tae-yong. In the meantime, Tae-mu, who had believed that his cousin had died in New York, feels threat-ened when he hears the news that Tae- yong has started working at the company.
On the other hand, Bak-ha is shocked and somewhat saddened by the news that her slightly odd but vulnerable new friend who calls himself the Crown Prince is, in fact, the grandson of CEO. But, before long, she gets into another tiff with Tae-yong who continues to linger around Bak-ha in order to get closer to Se-na.

View all 304 pictures for "The Rooftop Prince"