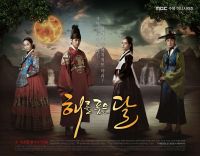 20 episodes - Wed, Thu 21:55
Also known as "The Moon That Embraces the Sun"
Synopsis
A court romance drama which is set in a royal palace during the rule of a fictional king. The story centers around 23-year-old king Lee Hwon and his first lover whom he is ready to give all his life. It is a story of innocent love among young people of a different era. Their sad but beautiful love story. Their pure royal romance shrouded in gloom. Love of different colors... The drama also talks about right-positioning. Every element should be set in its proper place. Just how it is dangerous for the solar system if the sun and the moon were to swerve off course, the whole world can be dangerous when things stray from their original path. This is the political ideology of King Lee Hwon.

Moon containing the sun, Yeon-woo (Actress Han Ga-in)
Hur Young-jaes daughter. Yeoms sister. Hwons first love. She is like the clear sky after a rain shower. She is smart and bright. By chance, she became a palace servant and meets Hwon who is still a prince. She becomes Hwons special friend, and he chooses to make her his crown princess. But she becomes stricken with a mysterious illness just days before her royal wedding ceremony and taken to her home (私家) in her last remaining days. She closes her eyes in her fathers arms. Eight years later, she wakes up to find herself as a Munyeo (female shaman) and has no recollection of her past...

Sun reaching for the moon  Lee Hwon (Actor Kim Soo-hyeon-I)
Prince Hwon. Handsome and smart. Overly confident. Used to be a troublemaker but takes an interest in scholarship with Yeoms help. He learns subjects that are fit for a king. He experiences love for the first time when he meets Yeon-woo, who also shows him the world outside the palace. But Yeon-woo suddenly falls ill and dies. So he reluctantly chooses Bo-gyeong to be his royal concubine. From then on, he matures into a king with an edgy personality. Cynical and aloof, King Hwon hardly ever smiles. He stays away from young concubines-in-waiting and even his own royal consort. Instead, he sneaks out of the palace to see the city. And one day, he meets a female shaman called Weol, who looks uncannily like Yeon-woo. This encounter makes him suspicion about the circumstances surrounding Yeon-woos death eight years ago. So he begins to investigate the matter.

Overshadowed by the sun  Yang Myeong-gun (Actor Jeong Il-woo)
Born between the former king and concubine Park Hee-bin. As a prince, he is first in line to ascend the throne! He acts as if he does not care about anything while enjoying wine and food. He is a free spirit, but no one knows how hard he works to be entirely free from his destiny. He grew up in the shadow of Hwon and his father, the viceroy, also shunned him. He found solace in the home of a Heungmungwan Daejaehak scholar. And he also met Yeon-woo at this scholars home and developed a crush on her. But when she is chosen to be Hwons crown princess and dies soon after, he becomes overcome with sadness. Eight years later, he is entangled in a dynastic struggle against Hwon.

Flaming flower with wilting petals  Hur Yeom (Actor Song Jae-hee)
Eu-bin (Kings son-in-law). High-ranking official and scholar (Yurokdaebu Yangcheonwi). Yeon-woos brother and Hwons teacher. All the female students swoon when he passes by because of his handsome looks. He is an unparalleled genius who also has human flaws. He is old-fashioned, dogmatic and emotionless. He is eccentric to a fault. He has a close friendship with Hwon who he mentored and later, when Hwon becomes the king, he becomes his loyal subject. After his sister Yeon-woo dies, he is ridden with guilt for introducing Yeon-woo to Hwon, because he thinks this led to her death.

Reaching for what is unattainable  Yoon Bo-gyeong (Actress Kim Min-seo)
Hwons queen consort. Daughter of Yoon Dae-hyun. With a ladylike demeanor, she has a nice and warm personality on the surface. Most people in the palace are on her side. Despite the fact that Hwon showed no affection towards her when she was pregnant with their first-born, she harbors no ill feelings towards him. She merely smiles in front of King Hwon without displaying a hint of any hurt feelings. This is the image that she has carefully and painstakingly cultivated. As she is a crafty person who pulls all the strings behind the scenes, consolidating her power by influencing the royal court, winning over the kings allies, and basking in the adoration of those who serve her. When Yeon-woo dies, her wish to become Hwons consort comes true. All along she thought Lady Luck was on her side. That is, until Weol appeares...

The Sun and the Moon | Cast

The Sun and the Moon | News

The Sun and the Moon | Shopping

The Sun and the Moon | Soundtracks, OST (Sponsored)

The Sun and the Moon | Pictures

View all 310 pictures for "The Sun and the Moon"

The Sun and the Moon | Videos | Suggest a video

The Sun and the Moon | Links | Suggest a link

The Sun and the Moon | Reviews

The Sun and the Moon | Facts

The Sun and the Moon | Community