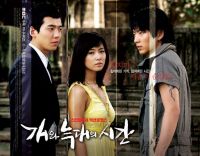 Howling wolves and dogs...
At dusk...
The sun paints the sky with a crimson red hue...
Over the hills, the menacing shadow of my dog confuses me as it seems to take on the form of a wolf...

After his mother is brutally murdered by the Triad in Thailand, Soo-hyun (actor Lee Joon-gi) is adopted by NIS agent Kang Joong-ho, and he grows up with Min-ki (actor Chuong Kyung Ho) like brothers. Min-ki and Soo-hyun both become NIS agents later on. One fateful day, Soo-hyun meets Ji-woo (actress Nam Sang-mi) after last seeing her in Thailand when he was a child. They start dating. One day, Soo-hyun ruins a mission when the suppressed memories of the day his mother died surfaces in his mind. NIS Director Jung gives Soo-hyun an undercover assignment to infiltrate the Triad and Soo-hyun takes the job. Soo-hyun fakes his death and assumes a new identity to become a member of the Triad. With his fake identity and new name, he prowls the back alleys of Bangkok...

Lee Soo-hyeon (Kay)  Actor Lee Joon-ki
An NIS agent. Underneath his quiet demeanor, he has a violent temper. At a young age, he lost his mother when she was killed by Mao, a Triad gang member. NIS Agent Kang Joong-ho adopted him and raised him with his son Min-ki. After learning that Mao became a Triad boss, he infiltrates the gang as an undercover agent. He assumes a new name, Kay, and goes on a rampage as a gangster to gain the trust of his gang.

Kang Min-ki  Actor Jeong Kyeong-Ho
An NIS agent. Hes a very competitive person behind his easy-going smile. As the son of NIS Chief Agent Kang Joong-ho, he grew up with Soo-hyun like brothers. After becoming an NIS agent like his father who, he admires the most in the world, he gets involved in a love triangle with Soo-hyun and finds himself competing against him at the agency. When Soo-hyun leaves the agency, he confesses his love to Ji-woo and they become lovers.

Seo Ji-woo  Actress Nam Sang-mi
An art director. She has a bright personality and is very considerate to other people. Shes honest about her feelings. After meeting her childhood friend Soo-hyun one day, they begin dating. But then Soo-hyun leaves her suddenly. She becomes Min-kis girlfriend after that and while she was getting over her painful breakup with Soo-hyun, she meets Kay.

View all 284 pictures for "Time Between Dog and Wolf - Drama"

Time Between Dog and Wolf - Drama | Links | Suggest a link