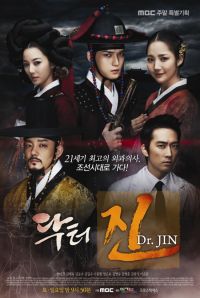 22 episodes - Sat, Sun 21:50
Previously known as "Time Slip Dr. Jin" (타임슬립 닥터 진, Ta-im-seul-lib Dak-teo-jin)
Synopsis
Dr. Jin, the top surgeon in Korea in the 21st century, finds himself transported to the year 1860 in the Joseon kingdom. How does he treat patients without state-of-the-art medical equipment and only armed with knowledge of modern medicine? There is no medical equipment or medicine in the kingdom but he has to somehow find a way to treat ill patients. Time traveler Dr. Jin is a medical drama with actual doctors advising the drama production. To save lives, Dr. Jin resorts to building his own medical instruments and developing medicine to remake himself into a better doctor.

Starring
Jin Hyuk (Actor: Song Seung-heon)
Koreas top brain surgeon. With a 180 IQ, he was the youngest medical student ever at his school and graduated at the top of his class. He scored a perfect score in the medical license exam. At the age of 27, he became the youngest brain surgeon in the country. With a razor-sharp mind, cool nerves, rapid decision-making skills, and delicate hands that a surgeon needs, he has never failed once in an operation he has undertaken.

Kim Gyeong-tak (Actor: Kim Jae-joong)
Young-laes fiance. As the son of a concubine and royal minister Kim Byung-hee, Gyeong-tak works at the royal police bureau. He is an excellent swordsman and a man full of pride. He also has an extremely competitive spirit. He never loses to an opponent and is careful to never reveal any perceived weakness to others. But he does have a soft spot for one person. And that person is Young-lae. When Jin Hyuk suddenly appears, Gyeong-taks relationship with Young-lae abruptly changes. Young-lae gradually grows fond of Jin Hyuk and later on Gyeong-take finds out that his goodwill towards them has been repaid with a betrayal.

Chun-hong (Actress: Lee So-yeon)
The most beautiful gisaeng in the entire kingdom. She has piercing eyes and can also see into the future with her mystical powers. Everything about her is a mystery. She is a talented dancer, musician and songstress. She knows how to manipulate men and no man has ever turned down her advances. But, at the same time, no man has ever loved her for the woman she is. The only man she has ever been taken with is Jin Hyuk but he does not wish to open his heart to her.

Yoo Mi-na (Actress: Park Min-yeong)
Jin-hyuks current girlfriend. She is working as a second year resident at a medical hospital. She has a sunny and outgoing personality while also possessing enormous compassion toward the poor. Jin-hyuk calls her by the nickname Wook Mi-na because of her quick temper. She grew up together with Jin-hyuk in the same home like brother and sister but they eventually started dating. After Jin-hyuk got into medical school, she also followed in his footsteps and became a medical student. She also wants to be a surgeon like him. One day, after having a big quarrel with Jin-hyuk, she is hit by a car right in front of him.


Miss Hong Young-lae (Actress: Park Min-young)
She is the daughter of a once wealthy noble family in the Joseon Kingdom in 1860. She looks like the twin sister of Mi-na but her personality is the exact opposite of her. She is lady-like, cautious, and very well-mannered. Her family arranged her to marry Kim Gyeong-tak but after she encounters Jin Hyuk, she changes her mind about following her parents wishes. As a woman living in an era where the female sex is oppressed and constrained by rigid social mores, she cannot dare to dream about making her own choices in life. When she realizes who she truly loves in her heart, she begins to dream about becoming a doctor.