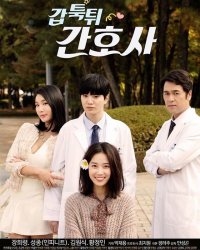 6 episodes - Fri (or 2 episodes)
Synopsis
Soo-ah lost her family in a car accident, but after getting a corneal transplant, she begins to foresee death in other people. Hyeon-woo is a psychiatrist who thinks he's the best in the world. He is falsely accused of medical malpractice and gets kicked out of the hospital. Adding fuel to the fire, his clinic is about to go under. Nurse Soo-ah appears in front of Hyeon-woo and they work together to save the clinic. Hyeon-woo didn't believe Soo-ah's ability at first but that changes when he realizes that Soo-ah can understand the states of patients better than him. 'University Hospital' is a romantic drama about a nurse who gains the ability to foresee death and a psychiatrist who is convinced that success is the only road to happiness.

View all 25 pictures for "University Hospital"