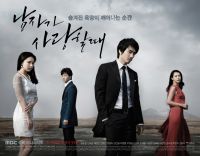 20 episodes - Wed, Thu 21:55
Synopsis
How long does love last and when does it bloom and shrivel? Love has two sides to it. Theres the fluttering of the heart and warmth. And wanting to become someone better than you are... Like nature that spawns life, love can uplift a depressed spirit. There are times when you are consumed by jealousy as well. The urge to have someones exclusive attention. And misunderstandings that arise from being insecure and feeling inferior... You cannot make a person love you back. Just like how you cannot choose when you will die, love is also like that. Its something you have no control over. We grow and mature as people through love.

Han Tae-sang, 37 (Actor Song Seung-heon)
A self-made businessman. Using profits from his successful lending firm, Golden Tree, he pursues a project to build a multi-use building called Space Q. He has plans to use several floors for a boutique hotel and also house a concert hall in the projected building. After making millions in the lending business, he enters the business of arts and culture for the love of one woman. For the longest time he was smitten with a woman much younger than himself. He fell in love for the very first time. After waiting patiently for years, he finally gets the nerve to confess his love. Whenever hed eat at a spicy rice cake shop or steamed monkfish restaurant he would be talking on the phone in a very serious tone. Once the woman he liked saw him crying while he was eating a hot chili pepper at a steak restaurant. This same woman called him a baby for liking his coffee with heaps of syrup and milk. And whatever she said would warm his heart and make him love her even more.

Lee Jae-hee, 28 (Actor Yeon Woo-jin)
Although he was born in a poor family, he excelled at school and possessed grit and determination. His goal in life was to have a happy marriage with kids instead of aiming for success. He is very fond of dogs and loves to be around kids. Before returning to Korea, he met a special woman whom he was attracted to and fell head over heels for her. But she didnt appear on a date they were supposed to have. Without knowing if he would ever see her again, he encounters her in Seoul by coincidence. But he finds out that she is Han Tae-sangs fianc?e. By accident, he reveals his feelings to her and they make love. They become closer and meet secretly behind Han Tae-sangs back. Ridden with guilt, Jae-hee decides to come clean with Han Tae-sang but then the woman he loves slips into a coma after being involved in a car accident.

Seo Mi-do, 27 (Actress Sin Se-kyeong)
Her father became bankrupt when she was in high school. She was also at the top of her class. She is multi-talented and she never considered herself to be poor. After failing to get into the college of her first choice, she finds it hard to take the college entrance exam a second time because her family cannot afford to send her to cram school. She becomes acquainted with a successful moneylender whom she is eternally gratefully to. Thanks to his longtime support, she finds herself falling in love with him and decides to get married. But then she takes a vacation where she meets a young man. After learning that Han Tae-sang had ordered a hitman to kill her in the accident, she pretends that she has amnesia and acts like she does not know Jae-hee for both of their sakes. She even fakes that she is paralyzed. When Tae-sang finds out about her ruse, Mi-do asks for forgiveness to avoid his wrath. He releases her, letting her live the life she want. Will she be able to find happiness now?

When A Man's in Love | Cast

When A Man's in Love | News

When A Man's in Love | Shopping

When A Man's in Love | Soundtracks, OST (Sponsored)

When A Man's in Love | Pictures

When A Man's in Love | Videos | Suggest a video

When A Man's in Love | Links | Suggest a link

When A Man's in Love | Reviews

When A Man's in Love | Facts

When A Man's in Love | Community