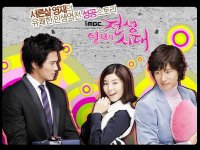 A story about a woman who has an unimportant job now but in the future wishes to be one of the best lighting designers!
We are about to present to you a commendable working woman of today through a success story of an older single woman who struggles to succeed through a fight with time and whose ability is always underestimated.
People say that society today is becoming a better place for women to work and live in, yet it still circles around men. We are about to draw dramatically how women with great abilities thrive to survive and the joys and sorrows that accompany such intense experiences.
We would like to advertise Seoul as a tourist attraction, much like Hong Kong used their million-dollar night view as a cultural product by developing a new genre called lighting art through the media.

What you're saying is that it's the end because I'm 30?!?
Starting a new challenge to achieve her dreams - Joo Young Jae
"I'm 30 years old, so what? Age is something that just happens. Anyone can turn 30! I really don't understand... I'm the same as I was when I was 20, nothing has changed. I'm the same Joo Young Jae. But why are there so many things I can't do just because I'm 30? Only the numbers have changed why is it so hard?
Young Jae's dream is to become one of the most famous lighting designers.
Her idol is the worldwide famous lighting designer Ingo Maurer, the "Poetess of light." Just a month ago 30 year old Young Jae was working in the general affairs department of Miam but then got demoted to the Kangnam exhibition hall. Her boyfriend Chan Ha proposed to her but she turned him down because she wanted to gain more experience in her work. Her work life was a living hell, and now, 3 months later, Chan Ha appears before her, a perfect man. Out of pride Young Jae tells Chan Ha that she has a boyfriend, and is startled when he invites her and her boyfriend to some lighting associations' couple's party. She hurries to find someone to take her when she sees an escort aid advertisement. She calls and finds someone to escort her to the party. But it was hard to act like lovers with someone shes never met before. Boy, did she feel miserable.
Finally an opportunity presented itself to Young Jae.
Miam's best man! An independent who has set up a company of his own has asked Young Jae to come and work for him at his company! Without any questions she quit her job and went to her new workplace only to find out it was a mistake. They meant to ask Joo Young Joo, a member of the development plan department of Miam, to come In addition, the owner of the company was that escort she took to the party! No matter what she can't go back to her old job; she has no choice except to stay.

I don't want to spend my precious time on some worthless emotion called love.
A man to which one of the most common emotion of love is the hardest thing to do  Um Joong Suh
"I've met a total pain in the neck. She asked me to act as if I were her boyfriend just to show her ex-boyfriend and now she is clinging onto me like gum stuck on the bottom of my shoe. Sometimes she seems alright but Miam's Park Chan Ha is also involved."
Um Joong Suh is cool, he has a charming look, unique sense of style and is known for his will to succeed with great passion in the lighting business. He is the most popular guy at work but he knows of nothing else but work, a true workaholic, He wants people to find happiness, hope, and dreams in his designs, but one day a new team leader comes in and says that light is just an accessory to shine darkness Eventually Joong Suh quits his job and sets up his own lighting company "City Light".
A new start...
He started with great expectations but things start to go wrong, in addition to that, he meant to hire a well-trained employee but by mistake a different girl showed up. It was that girl who asked him to be her date, Joo Young Jae.
He admits that it was their mistake and that he's really sorry but they can't hire her but she just won't listen. Work is another matter right now, he doesn't even want to see her face. After since he's met her everything has gone wrong. What should he do to get her to back down quietly?

That man next to you... do you really love him?
The girl who he has never stopped thinking of
The man that wants to bring back his long lost love - Park Chan Ha
"I went through much pain... to let you go, to become a man you can be proud of... I worked so hard... Does it really mean nothing to you? You still smile so brightly, you still get angry so truthfully... You still look very happy."
Chan Ha has been acknowledged for his abilities at the overseas branch and now Miam has transferred him to chief of the bulb development planning department. He has suggested a new direction for the team for increasing revenue but there is a fellow who keeps challenging him about it. I told him that if he wants to do art go do it someplace else and he simply said "ok" and left. Now he has started up his own company what a fool... In addition, he's the boyfriend of my ex-girlfriend who I broke up with 3 years ago!
He was feeling happy and fluttery that he met Young Jae again but to see her with that prudent Joong Suh he feels a mysterious feeling of competitiveness towards him. But the two of them... something seems just a little but strange about them.
Im not going to lose her to that cocky and impudent Joong Suh. I'm going to get her back, I'm not going to lose to Uhm Joong Suh in love or work!

In the beginning we were like that also. Don't you know that 3 years from now you'll feel the same way for her as you do now towards me?
Must become a sufferer - Joo Eun jae
"I thought that you were a man with a heart, at least to me, even though you cheated on me, even though we were together for 3 years, I thought that you would at least feel sorry to my family! One of us has to leave there's no way we can work together in the same place. But I have no plans in leaving so you leave..."
Eun Jae is a beautiful analyst with a 100 million won just around the corner. She has gorgeous and intelligent features and is the leading role of the young generation in the investment market with her excellent skills. Like the best she wanted the perfect husband so she was going to get married to the number one fund manager Philip. Anyone would think that she and her life was perfect...
But Philip's attitude towards her has changed since he came back. They were getting ready to get married next spring. But now he is leaving her for some girl he's been with for only 3 months. I asked him for some time but he ignored even such a small request... I trusted his love... No matter what I can't forgive him. No I can't forgive him for his selfishness. Eun Jae slowly starts to think of plans for revenge.

Love is a feeling! Right now my heart loves her.
A man who believes that love changes like your mind changes - Choi Philip
"Remember you a, cool and laid back girl, it's not that hard... we just need to wake tomorrow forget everything between us and just go on with our lives.
Philip lived a very luxurious life ever since he was little in a very nice home and got the best education. Currently he is strengthening his job as a fund manager and is engaged to Eun Jae who's got the looks and skills you'd want in a woman. But one day being with her just seems like a daily routine and he starts losing interest in her. After meeting 23 year old Yoonji he feels that fluttering loving feeling again and asks Eun Jae to get out of his life. After that, strange things keep happening... His car is moved to strange places and his presentation reports are switched with other reports... this has to be Eun Jae's doing. Eun Jae tells him that she's not going to quit. I have to get rid of her before she gets rid of me. While thinking about how to get rid of her he comes up with a great idea. He steals a project that Eun Jae was suppose to do and makes it his. That's it! This project marks the end of our relationship Joo Eun Jae!