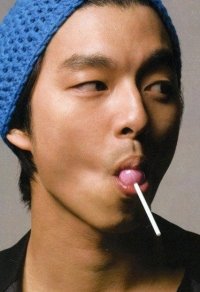 The long-legged, tall actor, is well-known for his easy-going manner, good looks, and fit body. But one thing that's been bothering him... Gong Yoo is young-looking for his age and has played more than his share of high school students. Now, 28 years old, the star wants to move on and pass that stage in his life.

An actor who already has his own signature style, it's actor Gong Yoo!
Gone is the uniform-clad high schooler, he's grown up into a mature actor! STAR FOCUS cameras caught him in action.... Heeeeeeere's GONG YOO!

He returned to TV dramas after a year spent away on the big screen. Today, we're on the set of , a story about long-lost siblings and the destiny that brings them back together after 15 years.
The acting rapport between Gong Yoo and singer turned actress Sung Yoo-ri, grows more interesting every day.

In the drama, Gong Yoo plays the character of "Seo Gun," a man who is lucky enough to be adored by two attractive women, Sung Yoo-ri and Lee Yeon-hee... But the actor's also adored by the staff, as well -

No matter how playful he is when the cameras are off, he's ALL business when the filming begins. And this time, Gong Yoo is feeling a bit more pressure than usual. He's used to working with older co-stars, but this time, he JUST happens to be the oldest one himself! Gong Yoo's co-stars of are younger than him, so HE has to be the one to set an example!

Gong Yoo started his career in showbiz with a part on cable TV. But he was soon whisked away by casting directors and landed a part in the film, , as a high school bully.
In , he was a clueless student, studying for his college entrance exams the third year in a row. He wasn't in the limelight yet, but he was very, very close.

In , he was cast as pitcher Park Chul-soon. The natural athlete in Gong Yoo enabled him to perfect the pitching style of the real-life baseball player - Even the Korean Baseball Orgaization applauded him!
Then the star joined Kim Sun-ah in the film "S Diary", as a arrogant young man she had slept with. The name, Gong Yoo, was quickly on the rise and catching the attention of audiences and the industry!

The immature, young rookie is replaced with a mature actor ready for some real action. His latest reviews have been laced with positive praise and eagerness to see more of the star. With popularity comes more pressure... But Gong Yoo has strong motivations.

The list of productions he's been in as a supporting actor is long - And finally, he has gotten his own leading role, one well-deserved.
We've seen the passion he has in his acting - But that's only the TIP of the iceberg!