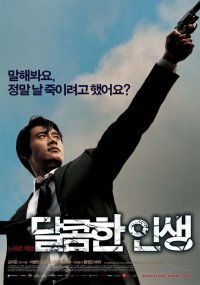 Synopsis
Seon-woo is a decisive, cold, capable hotel manager. He is the right-hand man to Boss Kang in a world where there are only commands and obedience. Suspicious that his girlfriend, Hee-soo, has another man, Boss Kang orders Seon-woo to investigate and, if it's true, deal with it. After three days, Seon-woo catches Hee-soo with another man and attacks them. But for reasons he can't understand, he lets them go. Before he can figure out why, he is brutally attacked by the gang and nearly killed. Now Seon-woo finds himself in a war. His momentary compassion for Hee-soo is no longer what is driving him. Step by step he gets closer to Boss Kang...

View all 79 pictures for "A Bittersweet Life"