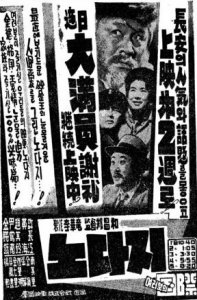 Synopsis
It's been 20 years since Jang Woon-chil (Kim, Seung-ho-I) left on a journey in search of gold. When he finally finds the gold mine and becomes rich, he searches for Yeong-ok (Um Aing-ran), the daughter he left when he was poor, and Park Dong-il (Hwang Hae), and the son of his colleague who died in the journey for gold. When he returned rich, a lot of swindlers, his down-and-out ex-girlfriend, and his ex-boss who became a jeweler approache Jang for his money. On the other hand, Yeong-ok who was a gangster member steals Woon-chil's gold mine map and takes on her final mission to stop being a gangster and live a normal life with her new boyfriend, Park Dong-il. Not having the slightest idea that Woon-chil is her father, Young-ok steals her father's map, and the gangster group bosses, Hwang Dwae-ji (Park, Nou-sik) and Ae-ggoo [One-eyed] (Jang Dong-hwi) abducts Yeong-ok to the gold mine. Woon-chil and Dong-il finally find Young-ok at the mine. Having killed off the two bosses in a shootout, Woon-chil, Dong-il and Yeong-ok leave the mountain satisfied and happy together.

A Bonanza | Links | Suggest a link