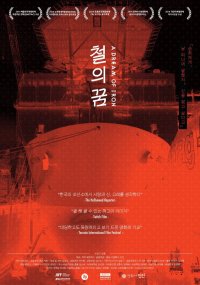 Synopsis
"A Dream of Iron" looks back on South Koreas history of modernization in the 1960s, when the nation underwent drastic economic changes under President PARK Jung-hees rule in attempts to recover from the devastation left by the Korean War. Artist Kelvin Kyung Kun PARK paints a portrait of what now remains of this time, when its people shared collective hopes and dreams for the nations new beginning.

A Dream of Iron | HanCinema Reviews

A Dream of Iron | News

A Dream of Iron | Pictures

View all 24 pictures for "A Dream of Iron"

A Dream of Iron | Videos | Suggest a video

A Dream of Iron | Links | Suggest a link

A Dream of Iron | Reviews

A Dream of Iron | Facts

A Dream of Iron | Community