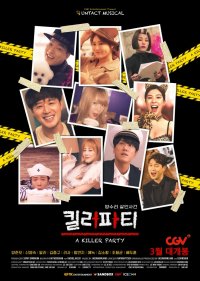 Shin Soon-kyeong, a police detective at the highly trusted Yangsuri police station, starts writing her memoirs after finishing her chores. Returning to her past memories, it begins in the mansion of director Jeong, the theater director in Yangsu-ri.

Director Jeong hums a song and prepares for a dinner party. He invited the actors from his new work to his house. All invited actors dress up in their roles and gather at director Jeong's mansion.

The new work written by director Jeong deals with the murder of a boat on board, and he is very excited, proud to have written the masterpiece of his life. While each of the actors was talking about the work and the roles, the light suddenly went out and a scream was heard.

After 60 seconds, director Jeong falls down with his head down on the soup plate. People think he is acting according to his work, but was soon found unconscious.

Who could be the killer?

View all 16 pictures for "A Killer Party"