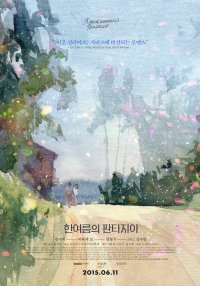 "A Midsummer's Fantasia" is a Korea-Japan co-production.
Synopsis
A Korean filmmaker journeys to a small rural town in Japan, Gojo with his assistant director Mijung who interprets for him. The film is in two parts whereby the first tells the story of the filmmakers encounters with interesting people of Gojo, while the second unravels a fictional tale inspired by the accounts in the first one. Presented in black and white documentary style, part 1 introduces a civil servant, a former big city salesman in his middle-ages who returned to his hometown, and an elderly lady who lives in the countryside near Gojo. In part 2, the female assistant director and the male civil servant in part 1 each reappear as a tourist visiting Gojo, and a persimmon farmer. Shot in color, part 2 shows how the man and woman become acquainted with each other as they walk and talk on the road, making it seem that the characters and stories of part 1 construct the encounters part 2 as fate. Cinematography is simple as it captures the romance between a Korean woman and a Japanese man in a foreign place.

View all 83 pictures for "A Midsummer's Fantasia"