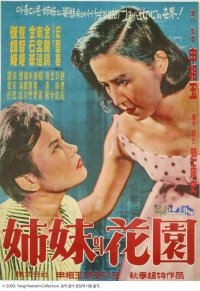 Synopsis
Dr. Nam, in his will, requests that his eldest daughter, Jeong-hee (Choi Eun-hee), marry a painter named Dong-soo (Namkoong Won). Jeong-hee is at risk of losing her house due to her father's debt, and a young physician Soon-cheol (Kim Seok-hun) who received his college education with the financial support of Dr. Nam, helps her by selling his own house. Despite his love for her, Soon-cheol cannot express his feelings because he knows of the request in her father's will. When Jeong-hee looks for a job to support her family, Bang, whom Dr. Nam once cured, offers her a position of saloon madam. Meanwhile, her younger sister Myeong-hui (Choi Ji-hee-I) promises Dong-soo her hand in marriage. Jeong-hee, now running the saloon, wishes them happiness. It is only when she gets a proposal from Bang and decides to accept it that Soon-cheol confesses his love for her. Moved by Soon-cheol's true affection for her, Bang gives her up, and Soon-cheol and Jeong-hee exchange vows of marriage.

View all 23 pictures for "A Sister's Garden"