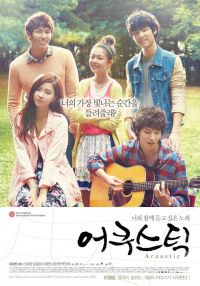 Groups of young musicians in Hong-dae are spreading. While starving because of music, the hope to live off of music can change in a second. This movie draws attention because of episodes of Sin Se-kyeong, CN Blue, and 2AM members.

"Acoustic" is a youth movie about 20-year-olds who look to music for their hopes, dreams, and love. Sin Se-kyeong will play a vocalist who has a rare disease that requires her to eat only ramyun. Seulong partners with Baek Jin-hee to become an awkward but lonely boy and girl. Also, Lee Jong-hyeon and Kang Min-hyeok from CN Blue play a drummer and a guitarist who enter a new music world after meeting a bakery owner.

In the movie, the song 'L.O.V.E.' that Seulong sings is a song that 2AM members sang for the soundtrack. They wanted to support Seulong in his first movie. It is a bright and soft melody that captures the heart. It also written by a hit song writer. Seulong also appears in the music video as an awkward dancer. The music video is very popular and drawing a lot of attention to the movie.

This special project highlights the acting and musical talents of pop icons and highlights youth and music. It will find audiences in late October.

View all 31 pictures for "Acoustic"