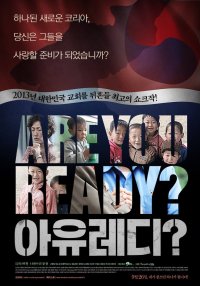 Synopsis
A New Perspective on Korean Reunification Through the History of Korean Christianity.

Are You Ready? | News

Are You Ready? | Pictures

View all 5 pictures for "Are You Ready?"

Are You Ready? | Videos | Suggest a video

Are You Ready? | Links | Suggest a link

Are You Ready? | Reviews

Are You Ready? | Facts

Are You Ready? | Community