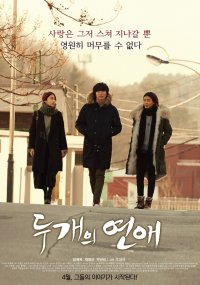 Formerly known as "Backwards Closer Together"
Synopsis
Film director In-seong and scriptwriter Yun-ju have been seeing each other secretly. Min-a, In-seongs ex-girlfriend, is now living in Japan, so when she decides to come to Korea to gather some news material, she makes contact with him and they arrange to go to Gangreung together. Yun-ju is kept in the dark about this. In the country cottage in Gangreung, In-seong tries to win Min-a back, but she doesnt want him and so she leaves. Now alone in the cottage, In-seong asks Yun-ju to come to Gangreung to join him. However, when he sees Min-a and Yun-ju walking out of Gangreung Bus Terminal together, he makes up one excuse after another in an attempt to keep the two women and him apart. "Two Rooms, Two Nights " comically exposes a man trapped by his own petard for playing both sides. Director Cho Sung-kyu, has made several films centering around light love stories- "Second Half", "Santa Barbara", and "The Winter of the Year Was Warm" -and this new film follows in a similar vein. (NAM Dong-chul)