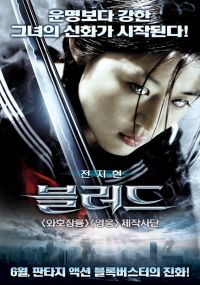 Blood: The Last Vampire is not a Korean movie, it's a movie coproduced by Hong Kong, France and Japan.
Based on a popular Japanese animation of same title and jointly produced by Hong Kong and France. Saya (Jeon Ji-hyeon), looks like a 16-year-old girl but is 400-year-old half-vampire, half-human assassin who has been given the mission by her boss Onigen, a demon, to kill vampires. Over time, however, she never forgets that Onigen killed her father. One day, Saya goes to a high school on a U.S. army base to accomplish another mission. But there, she decides that it's the last chance to avenge her father and sets out with her friend Alice to kill Onigen.

View all 75 pictures for "Blood: The Last Vampire"