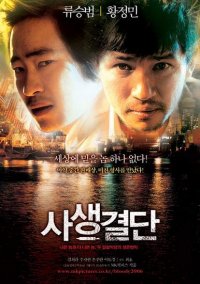 Here two men clash, Sang-do, a middleman for narcotics, and Lieutenant DO, a narcotics detective. Though in completely contrasting positions in life, the two men share an identical goal: to get hold of Jang-chul, the key figure in the dark world of narcotics in Korea. The two men begin a life-threatening battle.

View all 51 pictures for "Bloody Tie"