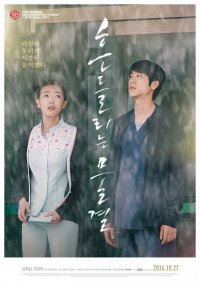 Synopsis
In a tranquil countryside hospital, radiologic technician Yeon-woo suffers from a mental disorder, the result of a childhood trauma in which he witnessed his younger brother die in a car accident. Won-hee, the hospitals newest nurse, shows an interest in Yeon-woo, but he doesnt appreciate her advances-he doesnt even get along with hospital colleagues hes known for years. Through a few chance encounters, they gradually grow closer and he opens up his heart to her. However, Won-hee has a secret that she hasnt told Yeon-woo, and it appears that their love will never be. This debut film from director Kim Jin-do is reminiscent of "Christmas in August" (1998), especially the serene attitude toward death and the meditative images of both the films characters and its setting. The way in which Yeon-woo and Won-hees families are presented also emphasizes the desolate atmosphere in the film. The familiar face of actor Sim Hee-seop from "The Sunshine Boys" (2012) and "The Attorney" (2013) and the fresh charm of Ko Won-hee, who starred in "The Silenced" (2015), are a welcome pleasure. (NAM Dong-chul)

View all 26 pictures for "Blossom"