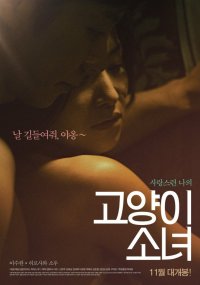 Synopsis
The lovely girl came back to me...
Wannabe actor Joon-cheol is living with his girlfriend who wants to get married. He tries to convince her to get married after he's made his debut but she breaks up with him in the end and kicks him out. Joon-cheol has nowhere to go but a friend of his has to go on a business trip and asks him to take care of his pet cat. However, what's waiting for him is not a cat but a girl with aphasia. Joon-cheol quarrels with his friend about calling the cops and comes out of the house. He goes back to his girlfriend but she doesn't accept him so he starts living with the cat girl.

The cat girl is hostile towards Joon-cheol at first but cuddles around him when he is nice to her. Everytime he cuddles her he thinks he's different from his friend. Joon-cheol tries out auditions while living in his friend's house thinking he wants to debut quickly and return to his girlfriend. One day when he's not home, his manager visits and sees the girl. He ends up having sex with her and uses her as an underwear model as well as erotic videos. He even makes her give sexual favors to directors for the sake of Joon-cheol. Then they find out her unspeakable past and their relationship gets tangled up.

View all 10 pictures for "Cat Girl"