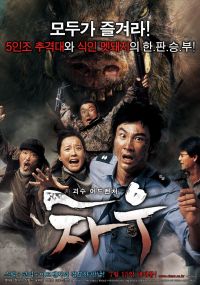 One day in a small and peaceful village Sameri, boasting no criminal cases for 10 years, a terrible accident happens. Some parts of dead body ripped off cruelly are discovered by ecologists who stayed in the mountain for studying wild animals. A policeman KIM Kang-su just transfers to Sameri from Seoul and takes this case. The victim turns out a grand-daughter of CHUN Il-man, who was once a legendary hunter. He is convinced that it happened not by human but man-eating boar, Chaw. People of Sameri with full of fear invites one of the most famous hunters BAEK to catch the Chaw. Hunter BAEK grabs it and looks like proving himself a best hunter. But the one which makes people scared is still in the mountain. The five of people that a greedy hunter BAEK, a former hunter CHUN reloading his hunting gun for grand daughter, a detective SIM in charge of this case, an ecologist Soo-ryun who takes any risks for studying mutant species animals and KIM Kang-soo whose mother has been missing head to the deep dark mountains.

View all 72 pictures for "Chaw"