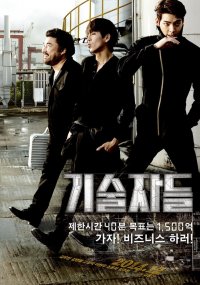 Also known as "The Technicians" and "Criminal Designer"
Synopsis
The second movie of director Kim Hong-seon who took home the Rookie Director Award at the 33rd Blue Dragon Awards in 2012 with the movie "The Traffickers".
"The Con Artists" is about the business of technicians who gather together to steal 150 billion won hidden in the Incheon Customs during a limited time frame of 40 minutes.

View all 148 pictures for "The Con Artists"