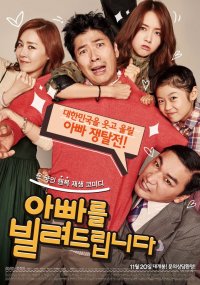 Synopsis
The story starts with Chae Ah-yeong, who came up with an idea of a rental business of her own father. On the day of her school garage sale, Ah-yeong presents her father Taeman Chae, claiming that he is her useful item which is not in use, and JT, who craves for a father figure in his life, takes the offer and rents Taeman. Since then, Ah-yeongs puts an advertisement on a website and Taemans father rental business expands making it official. However, out of shame, Taeman carries on his business without letting his wife, Jisu know about it. Taeman plays an excellent father figure for others who pay for the service, while neglecting his real family due to his busy schedule.
Meanwhile, Jisu suspects Taemans double life and figures he is having an affair with JTs mother, thus making their marriage fall apart. Realizing the crisis upon her family, Ah-yeong pays all her savings to rent her own father, Taeman. Taeman and Jisu realizes they have not paid enough attention to their daughter and reclaims their family value once and for all.

View all 117 pictures for "Dad for Rent"