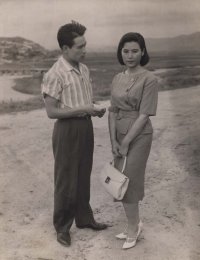 Synopsis
Lee Sook-hee (Choi Eun-hee) lost her husband to the Korean War eight years ago. She runs a dressmaking shop that has fallen into debt. When Kim Sang-gyoo (Kim Jin-jyu), the executive director of a publishing company, helps her pay off debts, she falls in love with him. He, however, is engaged to the daughter of his boss, Ok-joo (Do Kum-bong). His sister (Ju Jeung-ryu) pushes him to marry the boss's daughter, hoping that will bring him rapid success. Meanwhile, Sook-hee's grown-up daughter Kyeong-hee, wanting her mother to be happy, urges her mother to marry Sang-gyoo, but Sook-hee vacillates between social mores and her own happiness. Even though she and Sang-gyoo truly love each other, she decides to leave him and heads for her country home after selling her house in Seoul. Hearing the news, he who is ill in bed hurries to Seoul station, but it is too late. All he can do is just to stand on the platform and to watch her train pulling away.