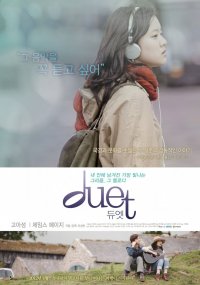 Synopsis
Child actress Ko Ah-seong, who received accolades for her role as the youngest daughter in the hit blockbuster film The Host (2006), returns to the screen as aspiring singer Nancy, who leaves
Korea for the U.K. to get over a breakup. The role is the first starring one for Ko, who is also set to star in The Host director Bong Joon-hos much-anticipated film Snow Piercer.
In Duet, Nancy meets a British guy Jude (James Page) on her trip, and the two develop a relationship as they talk about their mutual interests in music, photography and travel. Filming takes place in numerous locations throughout the U.K., including the Isle of Skye in Scotland. Nancy is portrayed as a sentimental and purehearted girl, while Judes laid-back, artistic character is the perfect complement to her personality. However, the romance comes to an end when Nancy has to eventually return to Korea. During production, Ko said that she introduced some of her favorite Korean indie tracks to Page in order to get closer to him before filming started.
The soundtrack for the film is filled with tracks by both mainstream and indie artists in Korea, including Yozoh, Kim Joo-yeon-I and music director Kim Young-soo.

View all 12 pictures for "Duet"