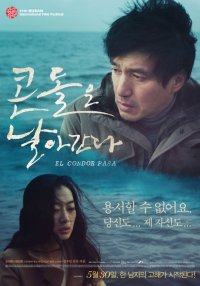 Synopsis
On her way back home from church, a middle school girl is murdered. PARK (Jo Jae-hyeon), a Catholic priest, visits the girls sister Soo-hyun (Bae Jeong-hwa) to offer his condolences.Through shared grief and melancholy, the two begin to develop deep feelings for one another, and are unable to avoid falling in love. For his trangressions, PARK is excommunicated, then spiraling downward into the nothingness of love gone sour. With few options left, he leaves for Peru in search of the only friend who might accept his confessions of guilt.

Director JEON Soo-il has been a mainstay of Koreas independent film scene since the early 1990s. With his roots in Busan, far from Koreas cultural capital, his films tend to feature both regional shooting locations and socially marginal characters, as can be seen in "El Condor Pasa". His films have appeared at nearly every major international film festival of note. His 2007 "With a Girl of Black of Soil" took home awards from Venice, Deauville, and Busan.