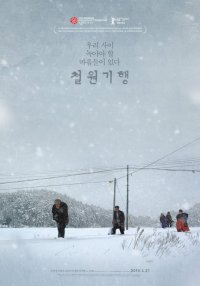 Synopsis
Upon the retirement of the father, who has been a teacher at Cheorwon Technical High School, mother, two sons and daughters-in-law gather in Cheorwon. The retirement ceremony is rather quiet, and father drops the bombshell at a Chinese restaurant while eating. When he announces he will get a divorce, mother is so angry she doesnt know what to say, and the sons and daughters-in-law are confused. Heavy snow hits Cheorwon keeping the buses from operating, and the family start an awkward time at the fathers residence. Mother, who is in charge of the familys finance, is not fond of the elder son couple, but the daughter-in-law wants to be loved by her in-laws. Moreover, the couple needs some money and is waiting for the right moment to ask for loan, and the younger son also needs the money. The father already arranged a place to live on his own and offers the family some steamed potato that he grew himself. The buses leaving Cheorwon dont run even after two days, and the family continues the cycle of misunderstanding and understanding for two nights and three days. (NAM Dong-chul)

View all 28 pictures for "End of Winter"