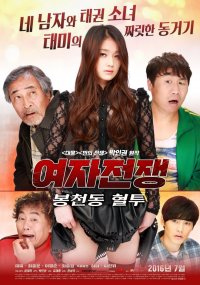 Synopsis
Haedanghwa, a beautiful woman, comes into the life of a single father and his three grown-up sons all of sudden! The abandoned woman, who does not have any memories about herself, begins her precarious cohabitation with the family of four men. And this is how the intense battle among four men to earn Haedanghwas heart begins. However, the story starts going towards a completely unexpected direction as a group of suspicious men appear.

View all 13 pictures for "Female War: Bloody War in Bongcheon-dong"