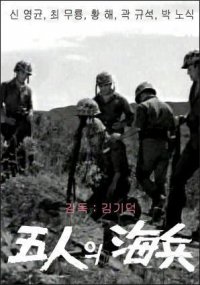 Synopsis
Oh Deok-soo (Shin Young-kyun) is a second lieutenant in the Korean Navy where his father Oh Seok-man (Kim Seung-ho-I) serves as a commander. He believes he was always treated unequally from his older brother since his youth. Other marines at the base are highly individualistic and get into some skirmishes occasionally, but they soon build a sense of togetherness. One day, the youngest marine, Ha Yong-gyoo (Nam Yang-il), who was the most liked in the base, gets killed while on a scouting mission. Enraged by this tragic incident, squad commander (Dok Go-sung) sneaks into the North Korean camp alone. After suffering a severe injury, he escapes from the enemy camp, and right before he dies, he informs the base that the North Korean Army is expanding their ammunition dump in preparation for a full-scale attack. The marines, including Woo Jeong-gook (Choi Moo-ryong), Jang Yeong-seon (Park Nou-sik) Kim Hong-goo (Hwang Hae) and Ma Joo-hwan (Flyboy), volunteer for a risky mission of bombing the ammunition dump of North Korea with Oh. Before leaving, Oh resolves all the misunderstanding he has had with his father. 5 marines infiltrate the enemy camp and complete their mission. However, 4 marines, excluding Woo, bravely sacrifice their lives for the success of the mission. Woo Jung-gook returns to his base carrying the dead body of Oh, who died on the boat after the escape. He hands over the confidential documents that Oh had seized from the enemy and what Oh left behind for his father.

View all 11 pictures for "Five Marines"